ONE GIANT LEAP & A FISH SUPPER 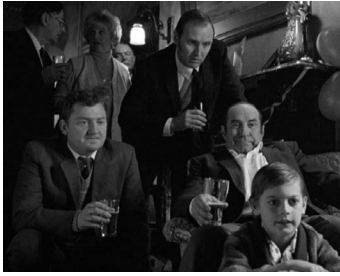 This year marks the 50th anniversary of man landing on the Moon. Lympstone Film Society has discovered a brilliant and nail-biting comedy called The Dish, about the telescope located on a remote Australian sheep farm which relayed to the world the live television pictures of man’s first steps on the Moon in 1969. This is just one of several true stories in the new Film Society season. Rudolph Nureyev’s sensational leap to the West in the early 60s is told in Ralph Fienne’s 2019 film, The White Crow. The Canadian folk artist, Maudie Lewis, wonderfully played by Sally Hawkins, falls in love with a fishmonger in the breathtaking landscape of Newfoundland, and Cornwall’s shantymen, Fisherman’s Friends, sing up a storm in a feelgood film that mixes fact and fiction as it tells the story of the rise to fame of the Port Isaac fishermen/ singers. No wonder a fish supper is the popular feature meal open to members of the Film Society this year. And we hope that the Lympstone members of the Exmouth Shantymen will entertain us in the first half. A very different true story is told by American Animals, the attempt by three teenagers to steal Audubon’s Book of American Birds worth $12 million, one of the most audacious art heists in US history. The real thieves are interviewed alongside the actors who portray them.

Picture: Watching the moon landing in The Dish.

Olivia Colman won the Oscar for her performance as Queen Anne in The Favourite, a period drama with lashings of lust, intrigue and deceit that also stars Rachel Weisz and Emma Stone as the Queen’s very close friends. Membership of the Film Society, now in its 13th year, brings 9 Friday night films and 3 Sunday matinees, which this season are Rebel Without a Cause, starring James Dean, The Best Years of Our Lives, and Carol Reed’s Odd Man Out, three classic movies selected and introduced by Martin Fisher.

A popular feature is the pre-film drinks and nibbles in the Function Room, which gives members an opportunity to meet and socialise every month.
This feast of films and entertainment is available to members for an annual fee of only £20 for the season.

You can join by contacting membership secretary Helen Dimond on 01395 223 433, or by joining at the first film at the Village Hall on Friday, 13th September. Lucky for some!