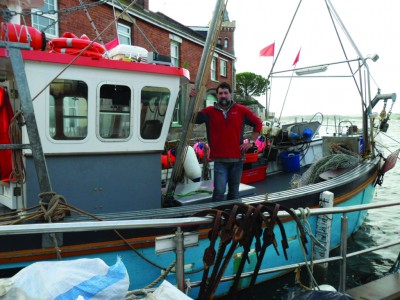 As the early morning high tide hits the shoreline in the little Lympstone boat shelter, local fisherman Jason Ingham ties up in the brook – the end of another gruelling all-night fishing expedition.

His success or failure will be felt by the local pubs and families in the East Devon village alongside the River Exe who now look to him to provide a wonderful new source of fresh fish and shellfish.

For the past five years Jason has been re-fitting his boat the Compass Rose which he rescued from the mud.

The boat was one of the last commercial fishing boats to work out of the village but had been sitting in the boat shelter deteriorating for years. The boat had been built for a Cornish family in 1964 and spent its last years working for the Bisgrove brothers of Lympstone who were whelk fishermen.

Jason bought the hull and stripped it back to its bare shell. With his skills as an experienced carpenter and joiner Jason re-built the boat in his spare time between his work as a local builder and began fishing earlier this year.

Now he hopes his talks with the local planners and the environmental health department will allow him to open a fish store in a neighbouring building next year.

Inside he plans to install tanks for crab and lobster, an ice machine and a big walk-in fridge where he can store his catches and sell them.

Jason has been fishing on and off for most of his life having previously run a large fishing boat from Lympstone in the nineties.

“There were six or seven boats fishing from here in the seventies,” he said. “But it’s a different type of society we live in these days.”

Jason has 60 pots and fishes an area up to 10 miles from the river.

His long battle to get the boat shipshape has also involved a lot of red tape. His fishing licence alone cost £18,000. But it doesn’t stop there. Very strict quotas govern what he can catch.

In order to make the fishing viable Jason says he needs to retail his catch rather than take it to a wholesale market such as Brixham.

He added: “People from the village have so far been very supportive and want to see the boat here. The Harbour Board are very good to us and people are generally interested in seeing what we bring in.”

Jason is also keen to educate people on fish. He recently held an open event and invited villagers to sample some of his catch free of charge and to learn about different fish and different ways to cook and eat them.

He said: “We want to show people that there are alternatives and they are not inferior.”

Jason has a team of six villagers, including his youngest son Toby, who have undergone strict training in order to be allowed to operate the boat. The courses cover personal survival, fire fighting, first aid and health and safety. Each course costs £500 per person.

The boat has had to face an inspection to ensure it complies with all the current regulations and carries all the necessary and very expensive life saving equipment.

The costs involved mean the boat is a huge investment for Jason who is hoping he will find support from local people when he lands his catches.

Watch this space for more information about Jason’s fresh fish.