A Double First for The Lympstone Players! 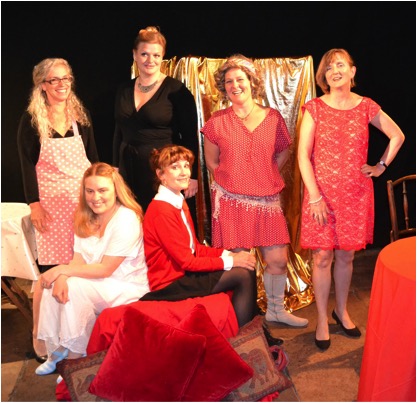 Following the success of two sell-out performances at Lympstone Sailing Club, The Lympstone Players achieved a double first recently by performing at The Bikeshed Theatre in Exeter and raising £1,000 for SAFE, a local charity.

Directed by Wendy Watson, Regina Monologues by Rebecca Russell and Jenny Wafer was imaginatively staged in the intimate space of both venues. A striking set of gold and red drew the audience into the contemporary world of six wives, each woman providing a compelling, insightful parallel perspective on living with Henry VIII, one of our most famous monarchs

As the six voices told a different story, the themes of love, betrayal, sacrifice and survival echoed from the past through to the present. Lisa Gordon as Anna and Anna Streather as Cathy provided sublime highlights of great hilarity as dramatic counterpoints to the tragic loneliness of Jane played by Becky Gilfillan and the visceral anguish of the sixteen-year-old Katie played by Heather Redding. The haughty, controlled responses of Katherine, the last wife played by Claire Lawry and Grace Packman’s resigned and bitter portrayal of Annie enhanced the wives’ collective experiences of women, both past and present.

A profit of £1,000 was made on this production and donated to SAFE (Stop Abuse For Everyone), a local registered charity offering specialised services to those affected by domestic violence and abuse.

Originally established in 1943 and with over 100 members, The Lympstone Players is a community theatre group based in the village of Lympstone Devon and has proudly produced over 120 plays, pantomimes and reviews.

Members have the opportunity to be involved in all areas of theatre production, both on and off-stage and new members are always welcome since they bring fresh energy, skills and ideas.

The Players’ next production will be the Dickensian drama, David Copperfield, to be performed at Lympstone Village Hall on 20th, 21st and 22nd October, 2016. Volunteers welcome for front of house and general production support.