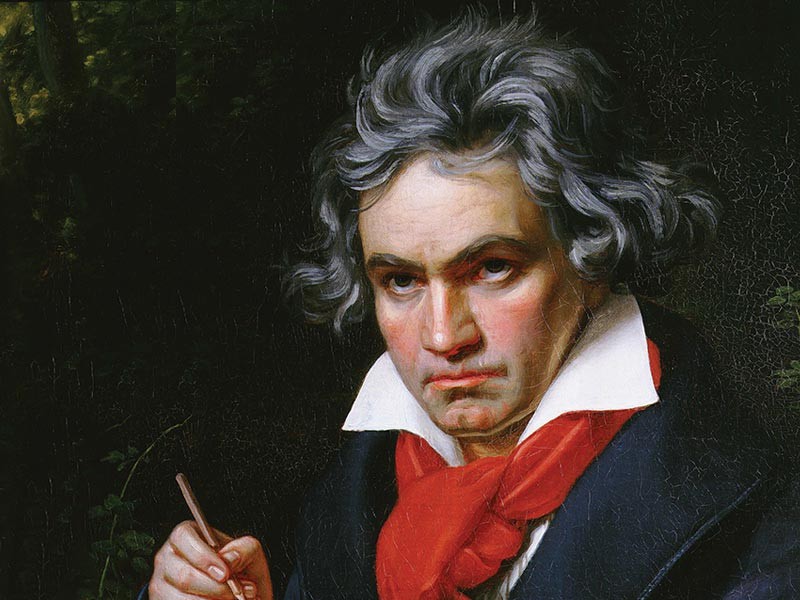 The enterprising group of people running Lympstone Entertainments has been bringing professional performances to the village for some years and the result of probably its biggest challenge was realised last weekend. It marked the first stage of a performance of the complete cycle of string quartets by Beethoven performed by the Dante Quartet in the fine acoustics of Lympstone Parish Church. So as to capture the mind behind these remarkable compositions, playwright, Clare Norburn successfully negotiated with the Arts Council and as a result, Beethoven appears at all performances in the guise of the brilliant actor David Timson offering and with the use of Clare’s scripts, comments on the life of the great man and the composer’s struggles greatly adding to the flavour of the presentations. It was a most successful, well-researched and tasteful combination. I joined a packed audience for the second concert that featured all three famous Razumovsky quartets Op 59 and found the evening’s playing absolutely intoxicating and the general presentation by David Timson thoroughly absorbing and brilliantly executed.

Founded in 1995 at Prussia Cove in Cornwall and now ranked as one of the UK’s finest quartets, the Dante played with impeccable intonation, style and flawless ensemble. The thrill of Beethoven’s quartets comes in part from the combination of virtuosic difficulty and the creation of emotional intensity which were brilliantly accomplished by the performers. Beethoven never wanted his performers and audience to become too comfortable and throughout the evening this was exemplified by the Dante’s dedicated interpretation of his unique craft. They also inspired the audience with an exhilarating sense of danger to underline the radicalism of the composer. As mentioned in his opening remarks, David Timson as Beethoven underlined the symphonic nature of these great masterpieces and to that end, the Dante Quartet, where appropriate, consistently met the enormous challenges of the quartets and played with sustained dramatic and psychological intensity.

There were so many highlights in this wonderful performance. In Op. 59 No 1, the most beautiful quality of sound and phrasing in the Adagio molto e mesto had a long-last impression with echoes of the spiritual and mystical features that characterise the late quartets. Shaking off such intensive emotion, the famous Russian theme which opens the last movement burst into life and rounded off a brilliant first half.

Communicating sudden and extreme shifts of emotion in Beethoven’s quartets also requires a combination of abandon and control. This was abundantly apparent in the Dante’s fine interpretation of Op. 50 No 2. Whilst two of the three quartets contain explicit Russian themes after Razumovsky’s request, it seems that this particular quartet projects the strongest Russian bearing in a kind of pervasive exotic intensity. This was well pronounced by the Dante quartet’s reading.

Finally, in the opening of the Andante of Op 59 No 3, the players succeeded in creating that required air of mystery as the first violin whispered the minor-key theme following the pulsating and exquisite pizzicato playing by the cello. This essential remoteness was then banished by the light and beautifully phrased Menuetto. The fourth movement followed without a pause, and the madcap four-part fugue that makes up most of the finale is meant to make the listener (and probably the players) breathless. We were not to be disappointed – on this occasion, it most was brilliantly played bringing this wonderful concert and insight into Beethoven’s compositions to a wonderful conclusion!

The second set of concerts to complete the Beethoven series at Lympstone takes place on Friday 2nd June at 7 p.m. Saturday 3rd June at 6.30 p.m. and Sunday 4th June at 3.30 p.m. and should not be missed! Tickets can be ordered in advance by phoning 01395 272243 and tickets will also be available at the door. Visit http://www.beethoven-lympstone.co.uk for further details.