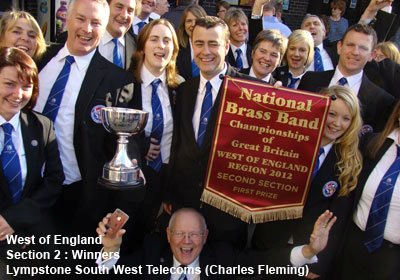 The summer months have been a busy time for the Lympstone South West Telecoms Band with series of concert at the Saddlers Arms in the village, and of course we enjoyed the annual Lympstone Furry Dance on the first Saturday in August – and the rain stayed away until right at the end!

On a rain soaked evening in early July, the band supported the Big Noise Chorus at Bicton Gardens – a massive outdoor event, which also featured Adam Isaac of ‘The Voice’ fame on TV. The band has also performed at an interesting event in East Ogwell, Newton Abbot to commemorate the 350th Anniversary of the ‘Puritan’s Pit’ a secluded area where Christians had to worship in secret all those years ago. The walk to the venue in the woods was rather muddy…one band member fell over and did get rather dirty! Don’t worry she has made a full recovery from her ordeal in which only her dignity was injured.

On a thankfully sunny afternoon in early September the band also performed at a special service to dedicate a new ambulance for the Exmouth Branch of St John Ambulance on the seafront opposite the Pavilion. The previous day, members of the band had also made guest appearances for a number of other local bands at the Exmouth Festival of Brass, a day which has become a tradition in local brass band circles, and one which enjoyed the best weather of the year so far!

The band’s main focus, however, has been to work hard on the test piece for the National Brass Band Championships to be held in Cheltenham on Saturday 22nd September this year. The piece is the very famous ‘Academic Festival Overture’ by Johannes Brahms – and a true test it is. The band are hugely relishing their trip to the Nationals, and will do their level best to bring some silverware back to the village.

Don’t forget the Training Band Revival on Saturday 8th September, get your children involved in music in the village!