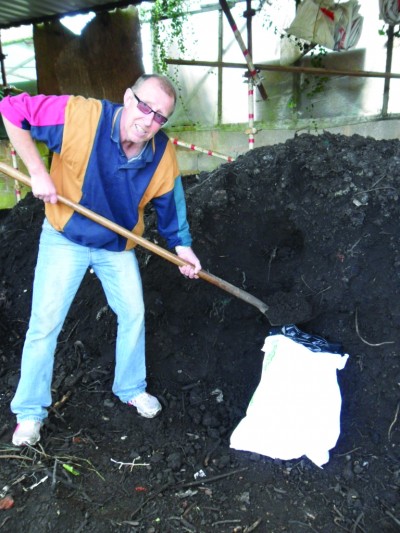 What have red tape and health and safety got to do with collecting garden waste?

Unfortunately the new rules and regulations brought in to regulate hundreds of volunteer composting groups is forcing many to close.

But in East Devon Chris Barnacle, who has helped run the scheme here in Lympstone, is hoping it can survive and may even pay its way providing local people give him their support.

The scheme currently involves weekly collections of garden waste with a restriction of six bags per household. The waste is then composted and sold back to clients with East Devon District Council giving the scheme credits for the amount of compost sold.

Lympstone Compost was started as a service run by volunteers 11 years ago. Chris became involved when he supplied a vehicle six years ago, but this year the service was forced to close because of a drop in volunteers and clients and because of new regulations which proved too costly.

DEFRA, the Department for the Environment, Food and Rural Affairs has recently introduced the regulations which means groups must have a licence and pay a start-up fee. They also have to hold a waste carrier’s licence and the site used for composting has to meet strict specifications.

The project has involved Chris in a significant investment and he is hoping the local community will back him by subscribing to his collection service.

Said Chris: “When the number of volunteers dropped off they ended up having to pay people to collect and to help out with composting.”

“This is a really good scheme for people who have no access to transport to get rid of the waste.”

Under his new scheme, due to start in March this year, the costs will be on a sliding scale depending on how many bags are collected. Six bags will be £36 for 37 collections per year.

He has found a new site near Exton and has invested in a tipper vehicle and some shredding equipment.

Chris says he is hoping to produce really high quality compost and also mulch for weed control. The service will cover the areas of Lympstone, Woodbury, Exton and Ebford and will start on March 7th 2012.