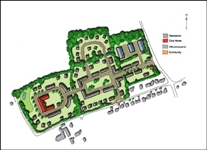 Heritage was brief and a minor issue. It was however disappointing that EDDC put up no fight at all on the impact of the proposed development on the setting of Courtlands House itself. So the 3 or so hours debate was almost all about the setting of the crenulated wall. We don’t think it’s a make or break issue either way!

Much more important is policy planning. David Seaton, Strategic Land Partnerships’ planning witness (and a former top man at Midas Homes) did a crisp and concise job of showing that EDDC does not have the critical 5 year supply of land for housing. Not only that but where housing has been built it is in the wrong place, in the sense that it is not where EDDC said in their published plan housing should go. So Axminster has had lots of new houses, far more than the plan said should go there, whilst Exmouth far fewer than in the local plan. So there’s an imbalance in total and an imbalance area by area. All of this hasn’t been helped by the endless delays at Cranbrook.

So SLP put up a strong case, backed by lots of data, to show that lots of houses are needed in and around Exmouth to meet the planning strategy and also that the appeal site is the only sizeable one likely to be able to be developed before 2016 (which is a key plan ‘milestone’).

This was disappointing to say the least. We also learnt that EDDC had in 2010 considered the possibility of putting a new secondary school on the appeal site – we think no one on the parish council knew this.

No hearing on Monday, so on Tuesday we get to EDDC’s cross-examination of Mr Seaton; we must hope that the 4 hours scheduled for that bring out strong points in our favour. Come and hear at 09:30.

SLP have applied for costs – this is a common tactic at appeals and will be considered separately by the inspector. Also SLP and EDDC have agreed a draft Section 106 agreement which spells out what money SLP would pay if the development went ahead for things like highway improvements and education provision.

The inspector hopes he can end the inquiry on Tuesday but it looks very much as though it will continue into Day 6, Wednesday.