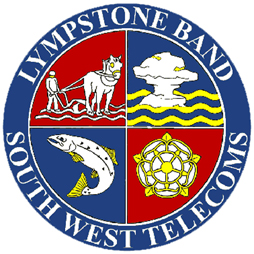 It’s been a busy and productive few weeks, very successful and enjoyable both for the band and the hundreds of people who have had the chance to enjoy our performances. We have had the opportunity not only to entertain, but also to help raise money for some important and worthwhile local and national charities.

A Saturday afternoon performance at Darts Farm back in September was well appreciated by the shoppers and a nice sum of money was raised to help support Vranch House in Exeter.

Then, at the Band Centre, a concert performance in aid of Shelter Box raised a healthy £145. The band really enjoyed this performance and used it to showcase some of the fine soloists within our ranks. The highlights were virtuoso solo performances by Baritone player, Brent Heyworth, and Soprano Cornet, Paul Luford who played perfect performances respectively of Concert Piece by Guilmant and Capriccio by Philip Sparke.

The previous week the band had played on the Bandstand in Dartmouth as part of a national initiative called “The Bandstand Marathon”, as Devon’s leading Brass Band, we were selected to play at this prestigious venue. The band was well received by the hundreds of local people and day trippers.

Unfortunately, a couple of band members have been quite poorly of late. Tim Gittins who many people will know, recently a Lympstone resident, is recovering back in South Wales after surgery. Long standing band stalwart Keith Gibson is also recovering after a nasty infection. We wish them a very speedy recovery.

In the meantime, life goes on for the band and only last week we put in a magnificent performance when we carried the name of the village to the South West of England Brass Band Championships. Not in the prizes on the day, the band never-the-less impressed the adjudicator and a large audience alike.

Continuing with the charity theme, the band recently attended a concert in the Great Hall of Exeter University.  This is the third time the band will have performed in the Classic’s Galore Concert, which has already raised £20,000 for the cancer charity Force. The band are justifiably proud of their involvement in this massive and successful event.