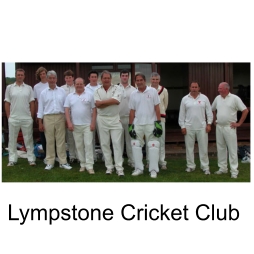 Regular readers will recall that Lympstone’s cricketers, having lost the first match of the season at Newton Poppleford, have enjoyed an unbeaten run ever since. So, much to play for on the return visit of Poppleford.

After losing early wickets to Ingham and Creighton, the visitors settled down with both Cardwell and House reaching the agreed retirement score of 25 against some steady Lympstone bowling. A tidy spell of 1-12 from David Wright, back to his economical best, kept the home side in the hunt. Just to make sure our batsmen had a chance, Captain Ingham brought himself back on for the last of his permitted four overs and downed the stumps with his third ball. A caught behind by Jamie Cooke off the next ball set up the possibility of the first Lympstone hat trick in recorded memory. Ben kept it straight, the batsman obligingly missed – and there it was! This brought Cardwell back to the crease, but he was soon lying alongside it after turning his back on a steeply rising Hall ball and suffering a crack on the head that was heard from the boundary. Cardwell carried on (still helmetless) to give Poppleford valuable extra runs. (The inevitable large lump had yet to appear by the time he left the Globe later on, still in good spirits.)

Lympstone, needing 113 to win, found scoring difficult against Poppleford’s young pace attack, but once the front line bowlers were off, Jamie Cooke and Patrick Hall accelerated to put the villagers back on track. After both had retired on 25, however, the wickets tumbled steadily, with no-one else making double figures. With 24 still wanted from the final three overs and Lympstone’s last pair struggling for runs, the prospect was bleak unless someone was out, thus allowing the retired batsmen to resume. This had not escaped the visitors either, who were much more intent on saving singles than taking wickets. At last, a wicket fell! Cooke returned, to plunder 17 in one over from a bowler who had only conceded 8 runs in his previous three! (This included a powerful six that only narrowed missed the scorer)

And so to the last over and just seven wanted! A single to Cooke put the onus on tail-ender Ollie Bainbridge, who clouted a two and was bowled off the third ball. Patrick Hall then returned to finish his innings, but he and Jamie could only manage a single a piece, leaving one for a tie and two for a win from the final ball of the match. Hall faced, heaved it towards the long on boundary – and found waiting there to catch him none other but the man who Patrick himself had felled with a bouncer earlier in the match! Sweet revenge for Cardwell, but none for Lympstone!