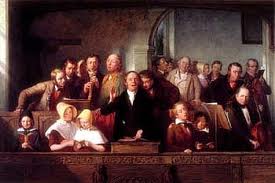 In the days before church organs, the music was provided by musicians who performed in the galleries at the west end of churches.

They could be rowdy and disruptive during the services, and many churches tried to get rid of them, but they developed a vigorous style of singing and playing which still appeals today. There has been a recent revival of the music they played, and a group of Devon musicians, The West Gallery Quire, will be performing their music, in costume of the 19th century, in Lympstone Parish Church on Saturday, 11th February at 7.30 pm.

It is just such a choir that goes out carol singing in Thomas Hardy’s comic novel Under the Greenwood Tree.

West Gallery music was eventually abolished because it was not considered solemn enough. For the first time in 150 years it can be heard again in Lympstone Church. Come and hear for yourselves The West Gallery Quire’s concert of sacred and secular music. Tickets are £7 from Jill Wilson at Orchard Cottage, Longmeadow Road, 01395 264753.