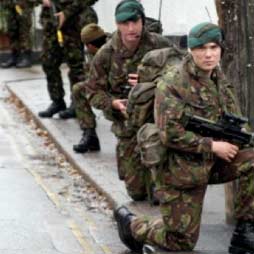 Royal Marines on exercise in the village of Lympstone. Picture by Terrt Ife ref exv 3518-43-10TI
More than 40 young officers held a two day training programme in the village last week.
The aim of the exercise was to help officers learn how to respond to the changing nature of foreign conflict.
Called Exercise Final Nail 10, the initiative is thought to be the first military operation involving an entire village.

Captain Richard Pinney, from the Royal Marines, attended a parish council meeting on Monday to ask for feedback.
The view of councillors was largely positive which prompted Captain Pinney to say the marines would like to do something similar next year.
Captain Pinney said: “From our side, militarily it was a huge success.

“This was in terms of applying soft power within Lympstone village dealing with the public and the challenges that brings for a young commander who is looking to go out on operations within the next few months.

“They need to understand it is not all about kinetics and war-fighting – it is also about engaging with the local population.”
He added: “By being in Lympstone village it meant that they could experience that in a more realistic setting.

“We will take the positive feedback from members of the community with a view of potentially doing this again in the future.”
Cllr Acca, vice chairman of the council, said officers appeared to have gained a lot of value from the exercise.

“People from the village have said that the young officers were precise, courteous and just how they should have been.”
Brig Ged Salzano, from the Commando Training Centre, said the training not only served to prepare marines for success when dealing with future security challenges, but also to strengthen their links with the community.

“The Royal Marines are at the forefront of tactical thinking and innovative training. This novel exercise was an example of how we are addressing the complexities of modern security situations.”

What do you think? Should the Parish Council extend the offer to use the community next year?