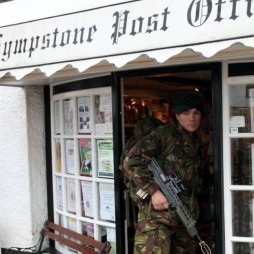 Royal Marine Young Officer Batch 2010 will be conducting a military exercise in Lympstone village. This will be the same exercise that was conducted in 2010. The Young Officers are 2 months away from completing their training and this is part of their final test exercise. The aim of using Lympstone Village is to give the Young Officers a new environment to work in and additional complexities such as interacting with a real civilian population and working with the local authorities (Police and Fire Brigade).

They will be using the Scout Hut on Cliff Field as an operating base and will be conducting patrols in the village. There will be specific activities in the vicinity of the Swan Inn, Candy’s Field and the military married quarters.  More details of these activities will be published closer to the exercise.

The Young Officers will be wearing full combat clothing, helmets and body armour.  They will be carrying weapons, but will not be carrying live ammunition.