Shakespeare in the Garden, more than a Measured success. 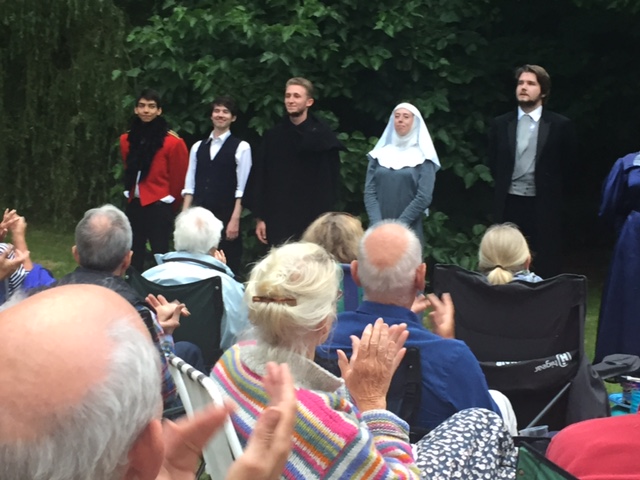 LOVE AMONGST THE DRAGONFLIES

A large and enthusiastic audience packed into Robin and Judith Telfer’s beautiful garden to eat their picnics and watch Cygnet Theatre’s production of Measure for Measure. A company of six gave an engaging performance of Shakespeare’s dark comedy, which quickly drew the spectators into the story. Love, lust and justice struggled for supremacy, as an English garden became the court of 16th century Vienna.

Cygnet is Exeter’s Training Theatre. The young actors’ ability to transform themselves from one part to another was particularly impressive. The actress playing the virtuous nun, Isabella, for example, almost instantly became the comic brothel keeper Mistress Overdone. Half a dozen performers created 18 characters before our very eyes, and brought to life a play written more than 400 years ago.

This was the third open-air performance of a classic play presented by Lympstone Entertainments, and it is becoming an annual fixture. As one member of the audience said, “The fact that the garden setting was so idyllic, with butterflies and dragonflies for company, made for a very special evening indeed.”