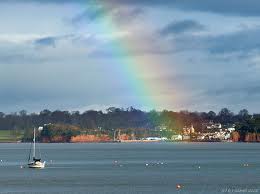 THE NIGHTINGALE IN CLOVER

At this time of year, Deb Mitchell would normally be painting pantomime sets, in Bristol, Plymouth and all theatres west. Instead, she has been in Exeter’s Nightingale Hospital, which is just receiving its first patients, painting murals at the entrances to its newly-opened wards. They were commissioned by the Hospital to make the wards easily identifiable, and to create a calming and positive atmosphere.

It is one of these murals that you will find on the cover of this month’s Herald – showing a deer in the park at Powderham, with Lympstone across the estuary behind it. Each ward is named after a wild flower, which explains the clover trailing across the foreground in this painting outside Clover Ward. Four-leafed, of course.

The 116-bed NHS Hospital has been built to provide care for patients suffering from symptoms of coronavirus. Deb has also painted a large mural for the entrance hall, showing a nightingale singing and several wild animals.

She lives next to Jason’s Fish Shed – you can see her decorated advent window there – and her studio was once Norman Mitchell’s boat-building workshop. She has been a scenic artist all her working life, including a long spell at the Northcott Theatre.

These are not her first murals. You will almost certainly know the large painting on the end of a building as you reach the centre of Exeter from the Topsham Road. This was commissioned by the Council in the late 1980s to celebrate the 150th anniversary of the Royal Institute of British Architects.

Deb’s Nightingale paintings will not be seen (we hope) by quite so many people. But they are much more likely to bring comfort and joy at a difficult time.