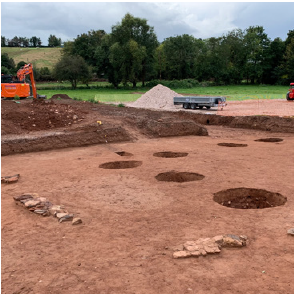 As part of the current redevelopment of the former Lympstone Nurseries site on Church Road, important evidence for medieval settlement has been recorded by archaeologists. Devon-based AC archaeology were commissioned by RBL Homes to carry out some archaeological investigations prior to the residential development getting underway. Evidence for medieval activity had been initially identified during some previous test pitting and trial trenching, which led to a planning requirement for more formal investigations to be undertaken.

The work comprised an excavation area adjacent to Church Road. This exposed the remains of what would have been a substantial timber structure measuring approximately 15m by 5m. The building remains consisted of large post pits measuring up to 1.5m in diameter and 1.5m deep that formed a rectangular arrangement. In these (long rotted away) large wooden posts would have been set that would have supported the structure. Something of this size would have represented a significant building, perhaps a hall. Elsewhere on the site a series of ditches were exposed that would have formed simple plot boundaries and drains. In these, items of domestic refuse such as pottery, animal bone and marine shells had been deposited.

The site has now been fully excavated and recorded by the archaeologists so that the development can commence. Although initial rapid assessment of the recovered pottery suggests a broad medieval occupation, detailed analysis and reporting on artefacts and soil samples that were taken should be able to provide a close date on the structure as well as an understanding on aspects such as status, economy and diet. It is hoped that the results from this work will then be able to add to the long history of Lympstone.

The report above has been kindly provided by Simon Hughes of AC Archaeology, who provided this image.