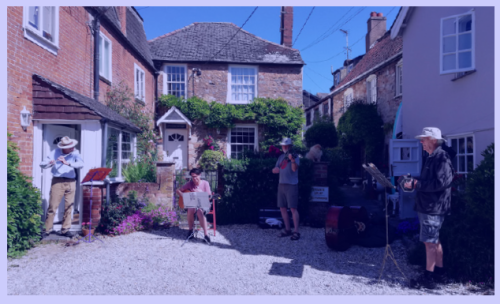 Before lockdown, every Monday morning Graham Banks would take his flute round to John Welton’s, whose concertina would join the flute in folk tunes from 9.30 to 10.30. With lockdown this had to stop, so they started playing in the open, always keeping two metres apart. After a few sessions outside the Swan, Bruce Ellis volunteered to join on guitar, so the Two Metres became the Six Feet.   Then Claire Belcher joined in on penny whistle. Then Alice Henderson joined on violin. Finally Warwick Downes trundled his double bass down from Burgmann’s Hill and the sessions really took off.

People come to their front doors to listen: some in pushchairs, some in wheelchairs. One delivery driver stopped to say, ‘I come through every Saturday and hearing you lot makes my day.’

It’s a sort of busking without a collection pot, but if you have heard it and enjoyed it, Graham would be very grateful for a donation to the Sam Banks Memorial Fund. This charity supports low income students in Bangladesh and due to the lockdown, a major fund raising music event in London planned for May (to mark what would have been Sam’s 30th birthday), had to be cancelled.
The Sam Banks Memorial Fund – Sort code: 30-96-61  Acc no.: 17450868

The musicians would like to thank those who have provided roadside spaces to enable these outside performances and for both the for both the forbearance and support of villagers.