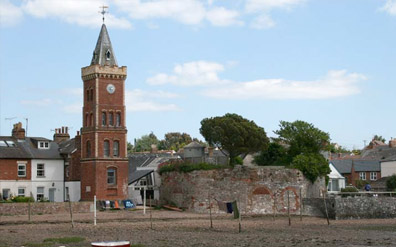 Lympstone is a small parish containing a populous village on the eastern shore of the Exe Estuary. The parish runs from the Exe in a thin strip about 1km x 3km up to the wooded heathland of the common. It consists of waterfront and harbour, long-established settlements, meadow, farmland and common; these elements have shaped its history and its appearance today.

Medieval farming brought prosperity to Lympstone, with a fine church tower built in 1409. Maritime adventuring and enterprise and modest tourism in the early 19th Century brought subsequent waves of prosperity, still reflected in many of the 70+ older listed houses of the village. Cod fishing, whaling, boat and ship-building, river and inshore fishing for mackerel and salmon have all boomed and faded, leaving a rich history and heritage. The links between sea and land are exemplified by old limekilns where sea-borne lime and coal were burnt to make fertilizers to sweeten the soil of parish farms.

Agriculture too has changed over time. The parish once had 12 active farms, 8 dairy herds and over 40 hectares of orchards, in a landscape of compact fields and narrow lanes. Modern agricultural methods and economy fit badly with this, and agriculture has been replaced by other uses and now perhaps less than a dozen people in the parish earn their living from the land.

The parish was, before the mid twentieth century, self-contained to a remarkable extent with over 20 village shops and most of the 2000+ population earning their living locally, especially in fishing and agriculture. Since WW2 the population has grown slowly to around 2000, with infill in the higher village and a succession of modest-sized new housing estates.

The Exe estuary is designated as a Site of Special Scientific Interest, a Special Protection Area and a Ramsar Site in order to protect the approximately 20,000 wading birds and wildfowl that live on and around the estuary. Within this internationally important total, the estuary supports nationally important populations of oystercatcher, grey plover, black-tailed godwit and dunlin plus significant numbers of the British populations of greenshank, ringed plover and pigeon.

Other birds found on the estuary include over wintering brent geese, lapwing and golden plover, breeding shelduck, plus cormorant, kingfisher, peregrine falcon, and the recently immigrated little egret. Many species feed on the abundant invertebrate animals, live in and on the sand flats of the estuary and especially on the highly productive mudflats.

The Estuary foreshore provides large numbers of people with enjoyment. At low tide, walking, crabbing from the harbour wall, cockle-picking on the sand beyond Lympstone Lake are popular; at high tide, there is boating and fishing. Whatever the tide, many enjoy watching the birds, photographing and painting or just simply enjoying the exceptional west-facing views across the estuary with the enormous range of changing colours and textures that make the foreshore so appealing.

Lympstone Common is situated to the east of the parish. Its 56 acres extends from “Downlands” at the top of Higher Hulham Road, which is the narrowest part of the Parish Boundary of only about 150 metres, opening out to the area known as “the frying pan”, towards Blackhill, returning past Squadmoor House and back to Pine Ridge.

The vegetation comprises good mature fir trees and areas of coppice, bracken and gorse which provides valuable habitat for nesting birds and other wild life. There are several public footpaths and bridleways that cross the area.