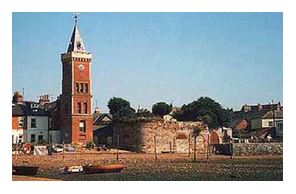 Lympstone as we know it today has been formed from the amalgamations and permutations of three small Domesday manors, Leveneston (Lympstone), Notteswille (Nutwell) and (almost certainly a Domesday manor) Sowden. Over the last hundred years it has been thought of as Upper Lympstone (from near the Exeter main road up through the farms to the Common), Lower Lympstone, and Sowden. It is curious how the ‘little manor’ of Lympstone has been linked with many famous or notorious persons over the centuries.

Lympstone has a traceable history going back to the Romans (but see section on Geology). A Roman coin of Gordianus Pius III (238-244) was found in the churchyard in 1870 which can be seen in Exeter’s Royal Albert Museum.

There was a Saxon thegn here as lord of the manor of Levenestone before the Conquest (1066). We know this from the Domesday Book of 1086: he was called Saeward. The Domesday Book also records a mill, which still stands and was working sixty years ago (this in 1995) as part of the taxable manor: this too is Saxon in origin. A county archaeologist has recently said Lower Lympstone has the typical layout of a Saxon manor; it is likely that the half dozen larger houses either side of the railway bridge are on the site of ancient dwellings of the Saxon village. ‘Lympstone’ is thought to be derived from a word of Saxon origin, and has been variously spelt throughout the ages – Leveneston, Leustona, Veneston, Weleston, Limpston etc. – until about 1726 when the usage of ‘Lympston’, then ‘Lympstone’ began. ‘Sowden’, now part of the parish of Lympstone, but almost certainly a Saxon and Domesday manor and certainly a separate manor in 1330 (in the lay subsidy Rolls), lies in a parallel valley south of Lympstone. The name is a corruption of ‘south of the down’ or Southedon. It became part of the manor of Nutwell, subsequently of Lympstone, in 1357, when the manor was given to Sir John Dynham by charter. The Dynham family held the manor of Nutwell and Nutwell Court from about 1327. There was a fortified castle there and from about 1371, a private chapel.

During Saxon times, villagers kept a look-out for Danish raiders and many times had to flee with their families and cattle up the old drove roads (Summer Lane -the Parish boundary – and Wotton Lane) to Woodbury Common.

With the Conquest, William the Conqueror imposed a Norman overlord on Lympstone called Richard, son of Count Gilbert (brother of Baldwin the Sheriff). A William Capra then held from him, an absentee lord, and the manor was held in farm (This meant it was rented to a minor lord, and overseen by a reeve or bailiff.)”.

The next family to feature here, after many changes, were the de Albemarles from 1215 (de Alba Mara, d’Aumarle, Damarell, etc.), originally French knights. The de Albemarles also held the manor of Woodbury, and in 1228 the long connection of Lympstone and Woodbury began. In 1251, Reginald de Albamara divided the manor of Lympstone and created the Manor of Lympstone Rectory, an unusual step. The Albemarles were a litigious family, always to be found in court at Exeter or Westminster. They were also entrepreneurs: they fostered Lympstone as part of the port of Exeter, for ‘veneston’ is mentioned in a letter of 1310 as a member of the port. Evidently, perhaps emulating the Courtenays, they tried to establish a town here for in 1288 burgesses are recorded paying 9s. to William, de Aumarle. This venture would have been lucrative, but was seemingly unsuccessful.

The Albemarles were resident Norman lords but it is not known exactly where. Woodbury seems most likely, but no Manor House has been identified for certain. They used Lympstone church, for the church of Woodbury had passed from them in 1205 to Otterton, thence to the monastery of St. Michel, as the result of a lawsuit. (Another one.)

When the last Albemarle died (from the Black Death?), his sisters inherited his estates. Here it seems the connection of Lympstone and Woodbury ceased. The eldest sister took Lympstone; she married a Bonville of Shute. In the Wars of the Roses, father, son and grandson perished, leaving the one-year old baby Cecily Bonville the richest heiress in England. It is not surprising that when she was 13, she was married off to Edward IV’s stepson, Thomas Grey, then Marquis of Dorset. Lympstone was part of the marriage settlement made to his granddaughter-in-law, Frances Brandon, mother of Lady Jane Grey, and for this reason was not forfeit to the Crown when she was beheaded. Lympstone now ceased its connection with the very famous for a while, and was sold, with Woodbury, in 1557 to John Prideaux of Nutwell, Sergeant-at-Law.

However, in Elizabethan times there were people of note in Lympstone. Ralph Lane, a soldier and equerry of the Queen, went on Ralegh’s second expedition to the New World in 1585, and founded a colony on Roanoke Island amidst great hardship and deprivation. Later he was present at the Armada. He came from Lympstone. (A direct descendant, Samuel Lane, a fisherman, went to London from Lympstone in 1821 and became a publican and music-hall proprietor; Lupino Lane was descended from him!)

In the Civil War, still under the Prideaux at Nutwell, Lympstone was on the side of the Parliamentarians (in opposition to the Royalist Courtenays), and it is thought cannon were fired from the Cliff Field, trying to prevent supplies and reinforcements getting through to Royalist Exeter. Some cannon balls have been found locally. (Cliff Field, above the Boat Shelter, is now cared for by the National Trust, and has a wide view over the estuary to the Haldon Hills and up the river to Exeter. It can be approached by a footpath behind the Swan Inn).

Piracy was rife off the coast of Devon in the 16th and 17th centuries. In 1573 there were complaints against ‘Prideaux’ and ‘Cole’: English pirates might protect traders threatened in the Channel by Moorish pirates or interfere with foreign vessels to pay their crew. John Nutt of Lympstone is recorded in State papers of 1623 as one such; he enjoyed the patronage of one Secretary of State, while he was arrested on the orders of the other! Foreign pirates, too, were very active. Throughout the Stuart period, West Country shipping suffered severe losses through Turkish pirates from Algiers, and the dreaded rovers of Sallee. At one period in 1638, no less than 15 Turkish pirate vessels were cruising off the South Coast of Devon, and were able to anchor with impunity in Torbay and under the lee of Start Point. Seamen, facing capture, being sold in the slave-markets along the Barbary Coast, becoming galley-slaves and having their tongues cut out, were understandably reluctant to man West Country ships. Lympstone men were of their number. The ‘Lark’ of Topsham was captured in 1638 and the ‘Swan’ of Topsham only just escaped. Collections for the ransom of men captured by the Moors in Algeria are mentioned in Honiton Churchwardens’ Accounts in 1618-19, by the High Sheriff of Exeter 1631-43, and by the Churchwardens’ Accounts for the parish of Littleham, 1679, and by those of East Budleigh in 1681. In 1678, an Exeter boy of 14 joined the ‘Speedwell’ at Lympstone and was captured with the crew by an Algerian rover. The ship was sunk; the crew were sold by auction in the market as slaves.

In 1675, the manor of Lympstone was sold eventually by Sir John Prideaux’ great-grandson to Sir Thomas Putt of Combe (after whom the apple ‘Tom Putt’ is named). His son, another Sir Thomas, was well in advance of his times, for when most villagers were still part of a feudal estate, he gave instructions that on his death his tenants might buy the freeholds of their properties with full manorial rights – an unheard of step! Several of the houses built on land bought at his death in 1721 still bear the name of independent villagers – Basses’, Manston’s (the former Smith’s, Teed’s) and others. (Indeed, then and later. many of the houses in the village have retained the name of former owners – “Hares”, for instance, “Mitchell’s”, “Stafford House”, “White’s Cottages”, “Metherell’s” and “Shepard’s”).

The Basses, who were important shipwrights, owned a huge property, from the end of Quay Lane to the limekiln now by the boat shelter and on back into the hinterland at least as far as Strawberry Hill. with its many orchards. Boat-building was very big business in Lympstone in the 18th century and continued into the 19th.