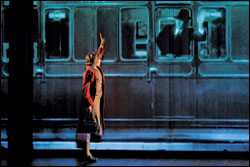 The Village Hall will be transformed into a cockpit theatre for the performances of Noel Coward’s Still Life on 23rd, 24th and 25th June. The audience will be seated in tiers around the action for this most intimate of plays, as they overhear a burgeoning love affair in the refreshment room of a railway station in 1936, to the background noises of trains coming and going.

When it was filmed by David Lean as Brief Encounter, starring Celia Johnson and Trevor Howard, it became one of the best loved and long lasting romantic stories.

The Function Room of the Village Hall is being turned into the Brief Encounter Buffet for the run of the play, and audiences will be able to enjoy a buffet supper either before the play (at 6.30pm) or afterwards (at 9 pm).

The production is being staged as part of the 150th anniversary celebrations of the coming of the railway to Lympstone. Buy your tickets for this romantic journey from the Post Office.