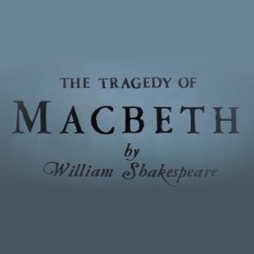 So Macbeth did come, and is now gone. But not before playing to packed houses and wide acclaim. The Players and producer Harland Walshaw have received many appreciative comments from inside and outside the village. Below is a review written by Steve Hill, a professional journalist with national newspapers who was visiting Lympstone to see this production. ‘VILLAGE SHAKESPEARE’

With its large cast, Macbeth is not an easy play to produce. So it was a bold decision for the Lympstone Players to stage the drama – their first-ever Shakespeare play – to mark their 70th year of operations. They were well rewarded for their courage. The play’s director, Harland Walshaw, opted for an open stage on the floor of the hall. Simple white cotton drapes hanging from tree branches supplied the kind of setting that might well have served Elizabethan strolling players. Lighting and costumes created the atmosphere, occasionally helped by images projected onto the drapes, and echoing sound effects. Musicians with drum, trumpet and recorder punctuated the action. Tim Jupp, as Macbeth, was a revelation, demonstrating a natural talent and a compelling stage presence. The character has some of the greatest lines in all drama, and he delivered them with the power and precision of a seasoned professional. Heather Redding gave a superb performance as the scheming Lady Macbeth, goading her husband into abandoning every moral scruple, and then descending into madness herself. Among other fine performances, Clive Wilson’s relaxed and sure-footed Thane of Ross stood out, Ben Redding was a worthy Banquo and a splendid ghost, Bruce Ellis as Macduff gave us some moving moments (as well as a vigorous sword fight with Macbeth), and the Three Witches (Mary Truell, Sybil Bextor and Dawn Chapman) created the dark and eerie atmosphere with a piece of fine ensemble acting. Too many others to mention by name, but the whole cast and back stage crew – over 50 people altogether – came from the village. The children who played messengers, servants and attendants were a delight, and added to the feeling of a community presenting Shakespeare. A truly remarkable performance. Thank you, Lympstone.’

Other visitors to the play included the Director of the Octagon Theatre Bolton, David Thacker, who has worked at many other theatres, including the Royal Shakespeare Theatre and the National. Seven of his productions have transferred to the West End, and he has won four Olivier Awards. After the show he wrote to Harland:

‘I hope you, your cast and crew, and everyone involved in your production are proud of your huge achievement in presenting Shakespeare’s wonderful play with such clarity, commitment and skill. And there is so much to be proud of – a community coming together to tackle the challenge of presenting such a complex and difficult play, the extraordinary attention to detail in the examination of the text (even Lady Macbeth’s ‘you do not give the cheer’ speech made total sense! (I’m not sure it has when I’ve directed it!) and the selfless dedication of all the cast. Thank you! And congratulations to you all.’

His wife, the actress Margot Leicester, who has played major Shakespearean roles at the Globe Theatre, including Lady Macbeth twice, wrote:

‘Thank you for a wonderful evening in the theatre – it was a real joy to me to see the committed way all your players acted together to be a true ensemble in creating the life of the play. And it did live for us. Thank you for a transforming evening. ‘