New curtains for the Village Hall 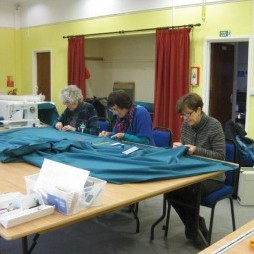 A great team effort during February half-term week has produced a full set of new curtains for the village hall – a total of 26 curtains, as well as a new piano cover.

The Function Room was turned into a curtain factory, handling nearly 60 metres of teal coloured velvet and black-out lining.

All of the following helped generously with their time, equipment and expertise:

The new curtains and replaced or refurbished tracks will be fitted during the weekend of 12 and 13 March, after they have been professionally fireproofed.

‘This was a tremendous achievement said’ Sue Mildenhall. ‘I had hoped that we might complete the curtains for the Main Hall by the end of the week, but we did much more than that, finishing the Function Room curtains as well. We have saved the hall a couple of thousand pounds by making them ourselves instead of having them made up commercially.’

Chairman of the Village Hall Committee, Don Mildenhall said, ‘We are hoping to get together a number of working parties over the next few months to make improvements to this wonderful village facility. If you’d like to help, please phone me or Pete Hardy. We’d be really pleased to hear from you.’