We came a wassailing… 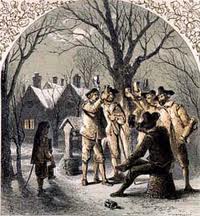 More than 80 people assembled in Sowden House orchard on Twelfth Night, many of them family groups, to wassail the apple trees.

The ancient custom of wassailing would have been common in the village 100 years ago, when orchards were everywhere, and apples were made into cider that helped pay the wages of the farm workers. But it was new to most of those who had come to quench their curiosity.

It was an atmospheric event. The children of the house performed a charming little play, the wassail choir sang wassailing songs, one from Whimple, children were sent up the trees which were beaten with sticks and blessed with much noise: “Hatfuls, capfuls, bushel bushel bagfuls! Huzzah!” And then all walked with lanterns and torches to another orchard, appropriately at Orchard Cottage, where more families joined in, mulled cider was served, hot soup, apple cake and wassail biscuits. More singing, more wassailing, and this time the Lympstone Mummers’ play, which enthralled all the children, who presumably hadn’t seen it when it toured the pubs before Christmas. Sheila Stone and Suki Commin have revived a wonderful tradition, which marks the end of the Christmas holiday, and is a true family event. The atmosphere was relaxed, convivial, and just a little magical. And the apple trees are now guaranteed to provide a rich harvest.

And money was raised for the Apple Day which is being planned for the 20th October. Huzzah!