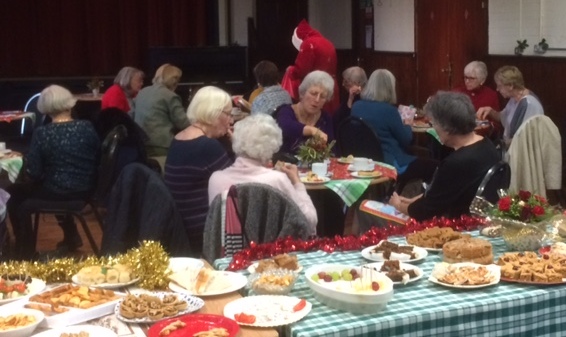 Once again this year we were lucky enough to be able to use for our Christmas meeting the Main Hall of the Village Hall, where, instead of sitting in our usual serried ranks, we chatted at bistro-style tables, each laid with Christmas decorations and a lovely flower display.

A small committee of members had put together the entertainment for the afternoon and each member had brought along a small plate of food and a bran-tub present. This year, Santa Claus himself made an appearance to hand out the gifts and we invited him to join us for tea. The festivities began with a short film, presented by our president, Diana de la Rue, about the WI centenary event held at the Royal Albert Hall in London in the presence of Her Majesty the Queen. Many thanks go to Suki Commin, Lizzie Hodge, and Sue Mildenhall for producing the film and to Brian Mather for setting it up and running it for us.

We were then entertained to a selection of Christmas songs performed superbly by a group of children from Lympstone Primary School. Luckily the children had left before members gave a much less accomplished rendition of some traditional Christmas Carols, masterfully accompanied by Lesley on the piano.

Diana de la Rue reminded us that this year the Lympstone WI is organising the Group Carol Service, followed by tea, mince pies, and home-made biscuits, at Lympstone Parish Church at 2 pm on Monday the 12th December. Parking will be available at Lympstone Nurseries.

The ballot was then drawn for the Denman learning bursary, which was won by Debbie Smith.

Our next meeting – and all future meetings until further notice – will be held in the METHODIST HALL on Chapel Road.

We will start the New Year by paying our subscriptions and discussing and voting on the resolutions outlined in the latest issue of WI Life. Our speaker at 2.30 pm on Wednesday the 4th January will be Simon Dawson, telling us how he exchanged the rat race and his London suits for country life and welly boots.

We are very pleased to welcome anyone who thinks she might be interested in finding out about the Lympstone WI. For more information please phone Diana de la Rue on 01395 274099 or find us on the village website.